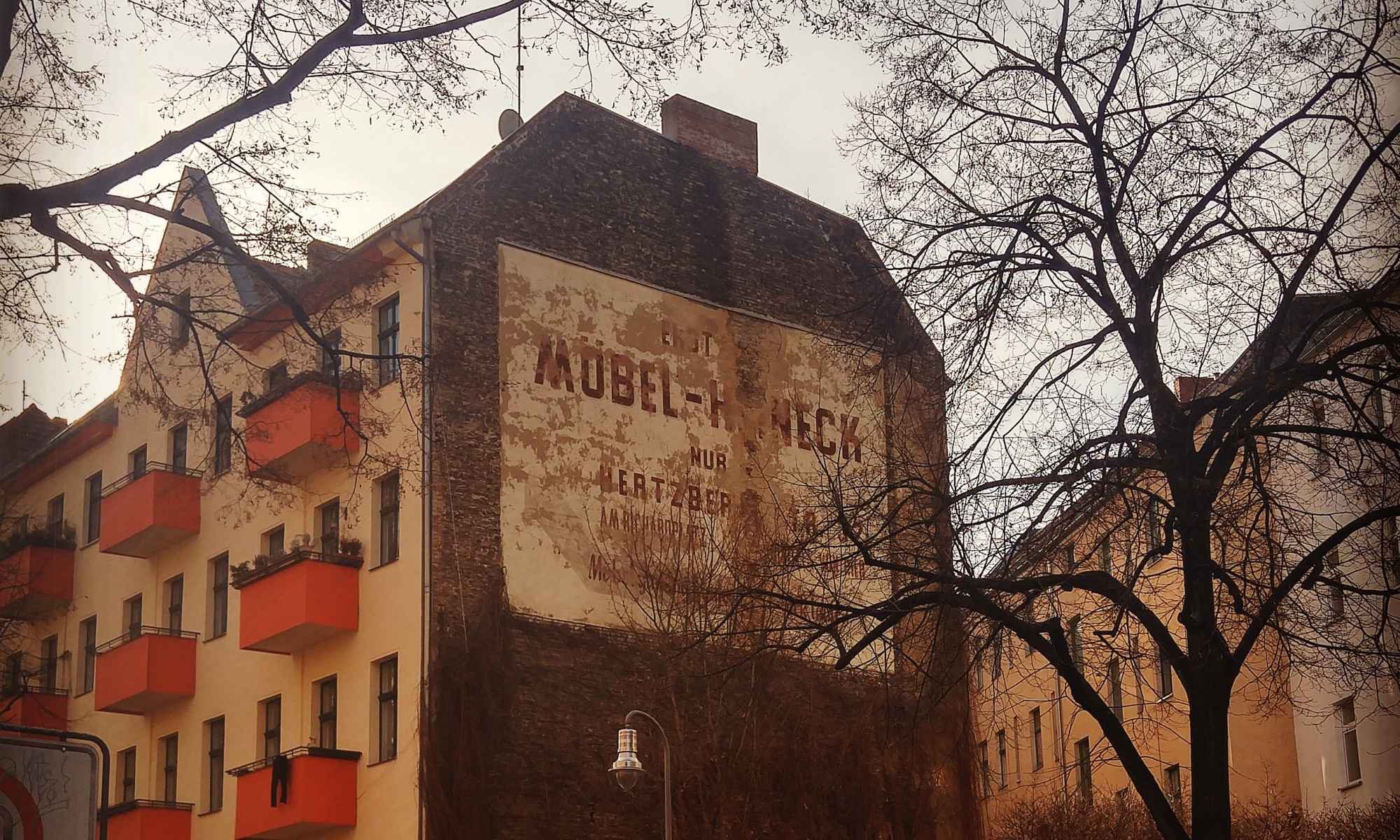 The last time I wrote about Berlin was a tongue-in-cheek piece about the best way to see the city: through a lens of crazy debauchery, not because I actually think being drunk 24/7 is the only thing to do in Berlin, which I think is the impression some readers had with the piece, but because Berlin just happens to be the sort of place where a disproportionate amount of crazy shit goes down. But I am capable of being a serious person, and there is a serious side of Berlin for me.

My grandmother loves to tell stories. She’s been through a lot of trauma in her life and it’s the only way she has to cope. She craves contact with others. The past few years have been very hard on her, as her health declined and limited her ability to leave her second-story West Los Angeles apartment, while at the same time her geographically close friends were slowly dying off (she will be 97 in July, most of her friends were around her age). And to top it off, she started losing her hearing which made it difficult for her to talk to people on the phone, or even understand people when they’re talking directly to her.

While all of these things have hampered her ability to be as social as she once was, she still loves to tell stories. She tells the same stories over and over. My mother often says it’s like a tape: once you press play, you can’t stop her until the story is finished, even if you try to interrupt and tell her you’ve heard this one before. Part of her storytelling style is she likes to ask questions: “And then you know what he did?” As I got older, I started answering this question with whatever came next in the story. No matter how many times I did this, she would still always react with shock when I could tell her what happened next. Like when she tells me one story about the Nazi officer who was in charge of guarding their train as it was stopped on the way to Auschwitz.

“And he saw us there, crammed into that train like animals, and you know what he did?”

“He brought you some apples.”

A sudden jerk of the head: “How do you know that?”

“Because you’ve told me this story before, Bubie.”

No matter, she kept plowing on, finishing the rest of her story even though she’s acknowledged that I already know what will happen. (He brought them the apples, and the lesson she took away is that she knows not all Germans were bad, that even the most lost souls can remember our shared humanity and try to redeem themselves. Those are my words, not hers.)  I often know what she will say down to the exact word, because she tells stories like she’s a witness who’s been coached, thus my mother’s comparison to a tape. 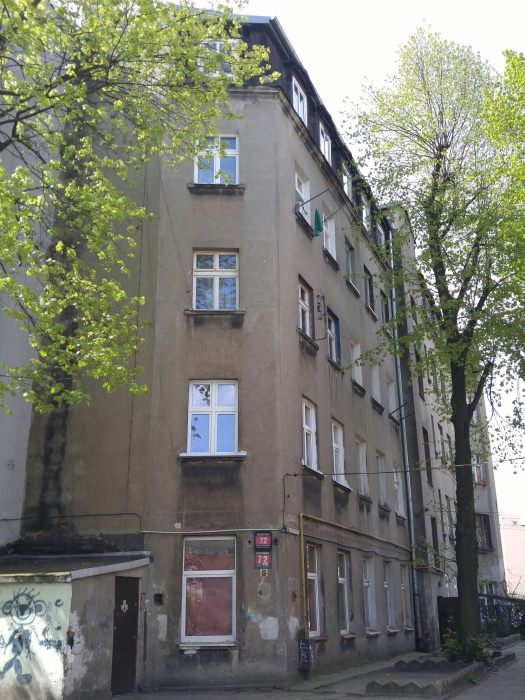 One of these stories was about her time in Berlin. I’ve elaborated briefly before about my grandmothers Polish-Jewish heritage. During World War II, she and her family were put into the Łódź ghetto, and when the ghetto was liquidated she was taken to Auschwitz. She didn’t stay there for very long, because she was quickly taken to Berlin as one of five hundred girls chosen to work in Krupp’s factory in Neukölln.

She told me this story often. She told me about how they selected them to go to Berlin: only girls in perfect physical shape were taken, and one of her friends who had a large scar from surgery quickly ran to the factory group when an SS officer was distracted by an overhead plane. She told me that her foreman was actually a nice man, who showed the girls a secret tunnel to escape in case the bombs started falling on the barracks. She told me that she learned that if she heard the bomb, it was ok because there was enough time to hid. But if you saw the bomb… well, to put it not so politely, you were fucked. (That is my own colorful spin; although my grandmother has gotten a lot looser with her language the older she gets, being fucked is not really an expression she has in her repertoire even though her English is almost perfect.) She told me about the day she was sent to Sweden as part of a Red Cross prisoner exchange, and how that was like her rebirth. She especially liked telling that last story when she would come to speak to my history classes at school. She felt it was better to give ‘young people’ a more hopeful, less traumatizing story.

The thing she talks about most of her time in Berlin isn’t actually her time. She claims one of the girls who worked in the factory with her went back to Berlin, I think sometime in the 1990s, after the reunification of Germany.  My grandmother always tells it like this: this woman went back to Neukölln, where the factory was. In a small park next to their former barracks, the local schoolchildren had design and raised money for a small memorial statue. According to her, the plaque read: To the 500 girls who were slaves here, we ask them forgiveness and send them all our love.

Those are the words she uses. They’re practically burned into my brain, she repeats the story so often, always the same. She is, like my mother says, like a recording, which has to play from start to finish every time.

So on this bright, sunny, albeit cold winter day, I walked through Neukölln, the neighborhood where my German BFF now lives and I’ve stayed whenever I’ve come to Berlin for the past year, unwittingly so close to where my grandmother lived under much less pleasant circumstances.

Now the barracks are garden plots, something very common in Germany and Poland, so people who live in apartments can have an open space for their plants or barbecues. There is an information sign, with a QR code that leads you to a PDF with more information. 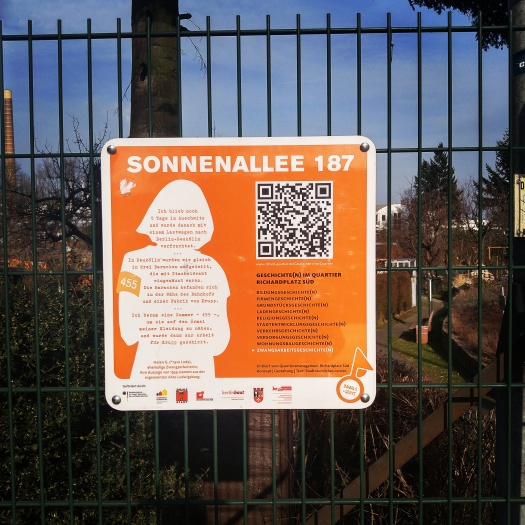 It was surreal, seeing this exact place my grandmother had been almost 80 years ago. It felt like we were connected through time and space. What did this street look like then? Obviously, no gardens, but barracks instead. But the old brick apartments across the street… had they been there? Did we see the same ad painted on the side of a building, hers new and shiny, mine old and faded?

But my grandmother is wrong. Or at least her friend was wrong. I found the former barracks. There is a park and an elementary school right next to them, but there is no statue. Maybe there was 30 years ago. I felt a weird chill in the air, one that has nothing to do with the winter temperatures. I know this is the place where my grandmother once walked, just as I am walking there now. Somewhere along the way the story has superseded the reality, or been slightly altered, maybe some other parts slightly lost. But I still feel that ineffable current, the one that connects the past to the present.

11 Replies to “Chasing stories in Berlin”