Noam Chomsky has postulated that there are certain properties that all languages share. This theory is called universal grammar. I can tell you from my time studying linguistics that while it sounds simple and straightforward and probably true, it’s actually quite controversial and hard to figure out what exactly is universal to all languages. But the more I see of the world, the more convinced I am that stuffing meat, potatoes, or veggies into dough may be our universal grammar. After all, what are wontons, gyoza, empanadas, tamales, and pupusas if not forms of dumplings?

Now I briefly have to digress on the subject of Polish cuisine. After living in two of the most diverse food scenes in the world, and also Mexico, Polish food is usually rather bland for me. Its not that I object to the building blocks (except beetroot. Beetroot can kiss my ass.) But a lot of Polish cuisine seems to be: here is some pork or potatoes cooked with oil and nothing else, also some sauerkraut. Maybe carrots as well. Na zdrowie!

Now the great thing about dumplings is that beyond the fact that they are filling and dough, you can put whatever you want in them! While this often means that Polish pierogi can be quite bland, they don’t have to be. This is where the magic happens.

The woman teaching me how to make perogi is Krystyna, my good friend’s mom. I first met Krystyna when Ala took me to my first Polish wedding in September. Krystyna is a very typical Polish babcia (grandmother)–she is constantly offering you food, all stuff she has made herself, most of it from her garden. You will bring her a gift for hosting you, yet you will go home with 4 times as much stuff as you came with. She speaks hardly any English, and I speak abysmal Polish, but somehow we get along great. She came to my apartment for Thanksgiving, and declared my cooking delicious (I would have been fine with it being adequate, I was so nervous she wouldn’t like it!) and invited me back to Jabłonów, her village, learn how to make pierogi.

We start the day as babcie are wont to do–with cake and sweets that she baked in anticipation of my arrival. She made gelatin with her preserved fruits–pears and strawberries from her garden. She also made a walnut honey cake with an orange liqueur-infused cream, which of course she made herself in one of her “experiments”, as she likes to call them.

We start with the most popular pierogi–pierogi ruskie. Why is the most common type of pierogi called Russian perogi when Polish people hate the Russians? Beats me. These are stuffed with potatoes and and soft, white cheese called twaróg, and sometimes onions. Pretty simple, but quite possibly pretty bland. But not here.

As we make pierogi filling, she sees me going easy with the pepper and says, “What are you doing?? Don’t you remember that I like spicy food?”

Ah yes, Krystyna is my kindred spirit, growing Thai chilis in giant pots around her house and sneaking chili into whatever recipe she can, much to the chagrin of many of her children and grandchildren.

Next we make pierogi z kaszą gryczaną (pierogi with buckwheat). This takes me back to my childhood, when my maternal grandparents would come over for dinner every Thursday and make kasza, green beans, and pulke (chicken drumstick in Yiddish). I remember loving the chicken, hating the kasza, and refusing to eat the green beans unless they were cover in Butter Buds. Luckily, my tastes have matured since then. We mix the last two extra potatoes with more twaróg, some sauted onions, and crumble in some dried mint, then add the cooked kasza.

Next, you let the filling set in a cold place, like maybe your refrigerator or maybe your un-heated boot room. You know, wherever. Now it’s time to make the dough. Again, there is no recipe, but you make it “to touch”. Like the way my grandma made pie crust. Pierogi dough should be soft, like bread dough. It’s quite simple: pour out a generous amount of flour (~300 grams), make a hole in the middle where you put about four spoonfuls of oil and fold it in towards the center, using a knife to mix. Then you add hot water bit by bit, constantly folding inwards with your knife to mix it until all the flour is doughy, after which you knead with your hands until everything is thoroughly and evenly mixed. Roll out a small chunk until it’s thin enough–and “thin enough” is something you’ll find once you start stuffing pierogi. Trust me, you’ll know if it’s too thick or too thin. If you’re not frustrated by all the “by touch” instructions by now, then you’re probably not doing it right.

Cut out circles of dough with a water glass. Hold the dough between your thumb and forefinger, making a little bowl for your filling. Spoon a bunch of filling on there–like, more than you think could possibly fit. Press it down until it seems like maybe it’ll all fit in there, then pinch the edges closed. Piece of cake! (Or maybe you should say piece of pierogi?) 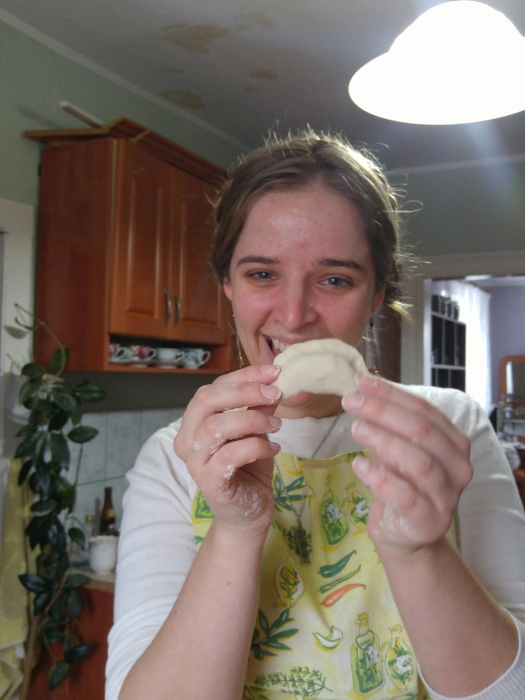 Now boil your pierogi in salted water. Let them float for a little bit. “How long is a little bit?” Ala and I asked. “Eh, you know, just a little bit. You get a feel for it,” Krystyna replied.

Let the pierogis “rest” for about five minutes then fry them for a few more minutes in a bit of oil. 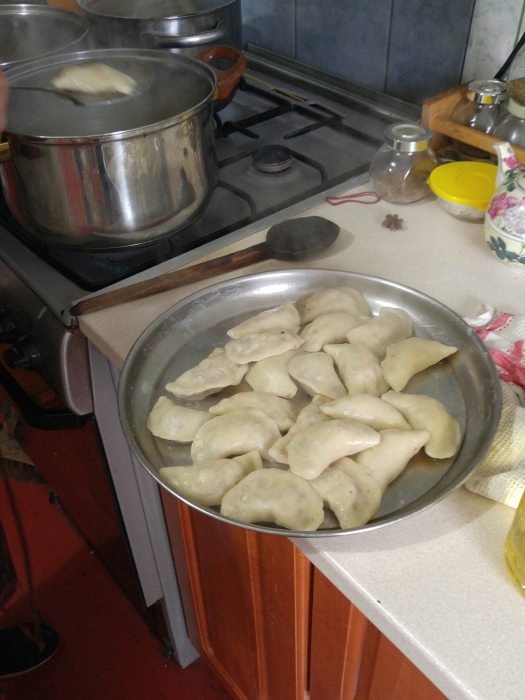 At the end of the day, after the marathon of making pierogi and eating and looking at family photo albums and clumsily communicating in a Polish-English pidgin (Ponglish?), Ala and I go back to Wrocław loaded down with food–plastic containers that once held cheese or pickled vegetables full of pierogi or cake, bags of dried mint, a whole tray of walnuts that I now have to crack myself. (Yeah, I don’t own a nutcracker. I haven’t made a plan for this yet. Will update when I do.) There’s a phrase people use in Polish–słoik, which literally means ‘jar’, but is used to refer to those kids from the countryside who go home for the weekend, then come back to the city on Sunday night with armfuls of food from their mothers.

There’s something universal about that too, the way people want to take care of each other–the way mothers and grandmothers will always insist that you eat more and take some home with you, like they’re worried you can’t feed yourself, even if you’ve been living on your own for almost a decade. My mother does it, and all my friend’s mothers do it. Almost every culture I’ve been acquainted with–Jewish, Filipino, Mexican, Vietnamese, Guatemalan, Korean, Polish–we all want to take care of each other. And even when I don’t need the food, it’s nice to be taken care of.

I’m not one to keep up with modern linguistics, so I’m not sure how Noam Chomsky’s universal grammar is faring. (I think not well.) But maybe the universal can apply to more than just grammar. Dumplings and słoik, all you need to reassure yourself maybe this crazy world isn’t so crazy after all.